I have come to the realization that my tastes have been changing lately. There’s a number of things I now like that I didn’t used to. Cabbage is one of them! This opens a whole new world for me. There’s a delicious Indian cabbage recipe that I love and coleslaw (I don’t really love the kind with mayonnaise a lot). I feel great that I now have these new things open to me!

Today I tried an Asian Cabbage Salad recipe. The recipe is designed to be paleo-friendly, but I am not paleo. Therefore, I felt completely comfortable substituting in non-paleo soy sauce. I also doubled the recipe.

I was happy to use my food processor to shred my cabbage too. It went SO fast! I think it only took me 20 minutes or so to wash everything and put it all together. As a new recipe, that’s pretty good for me. I’m not the most efficient when making new things.

First, I realized I didn’t have toasted sesame seeds, but I had raw ones! So I had to toast them. I was feeling a little paranoid about burning them because they are so small. My original plan was to toast them in the toaster oven so I could watch them the whole time, but 6 tablespoons of sesame seeds is more than I thought! I was able to chop about half the cabbage in the food processor while they toasted. I checked them constantly… I also noticed that they continued to toast a little on the hot pan after I took them out of the oven, so don’t over-toast (I forgot to take a pic after they sat a bit)! 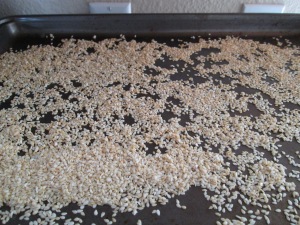 I used the oven at 250 degrees Fahrenheit. It probably took well under 5 minutes. I didn’t let the oven fully preheat before I put in the seeds because I’m impatient, but I did let it heat up to being pretty hot because I wanted them to toast quickly.

I did not measure the honey at all. In fact, I’m not sure if it’s really necessary. I also noticed that that much vinegar, soy sauce, and sesame oil is a TON! I may try cutting down the dressing next time.

The giant pile of cabbage…too big for my container!

Here’s how I did it (video)!: Food Process Shredded Cabbage

Ingredients for the Dressing 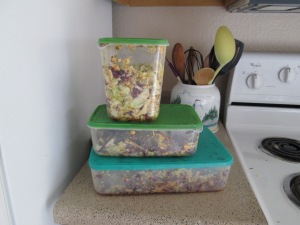 This is how much salad it made! Tons!

Because the salad was too big for my container, I had to use three. I tried my best to separate everything between the three containers; I think I did ok?

I did buy toasted slivered almonds. I wonder if there’s a way I can make slivered almonds at home. I was worried about being able to cut them without chopping off my fingers, which is why I bought them this time.

I plan on eating a GIANT amount of this salad for dinner tonight between teaching and my sectional. Now I just have to figure out where I’m going to eat it! 🙂

PS- I wish I knew how to embed videos. If you know, can you help me out?